Ecology and sustainable tourism in Ecuador to water chemistry and management in the U.K. 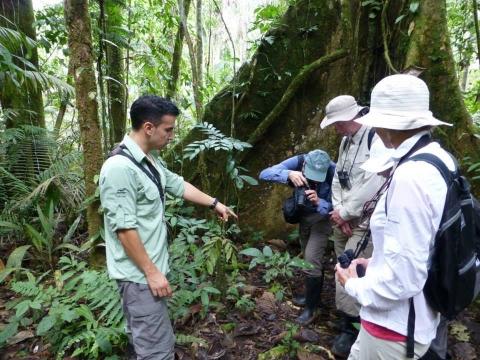 Dany Avalos '17 (Ecuador) received a Bachelor’s degree in Ecology and Sustainable Tourism and wrote a Bachelor's thesis on the Impacts of Tourism in Indigenous Communities located on the south-east bank of the Amazon Rainforest in Ecuador at the Kapawi Reserve and Ecolodge. After finishing his research, Dany continued to work at the reserve as a Natural History Guide leading educational excursions for tourists on the Ecological importance of the Amazon Rainforest, working with local community members on organic farming techniques, and training local staff at the Ecolodge in environmental practices. Following this work, Dany continued to work in the region on a project at the Napo Wildlife Center working with the Anangu Kichwa Community, a model of sustainability in a place of rich biodiversity. Dany also worked in the Galapagos Islands for a non-profit called Finding Species teaching young people about environmental awareness and natural history.

Dany found an opportunity to pursue higher education abroad thanks to an initiative taken by the Ecuadorian government to give scholarships for improving education and technology. He was 1 of 200 Ecuadorians selected for the scholarship program. Dany’s interest in preserving his country’s rich natural resources motivated him to search for graduate program in Environmental Sciences. He found MESPOM through Lund University, and was convinced about it as soon as he learned about the multi-criteria curriculum, and the combination of sciences, management and policy and the level of academia and professionalism that he would receive in his studies. This combination was what he saw as necessary to learn to improve and enforce protection of natural resources in Ecuador.

After completing three semesters of the program, Dany feels the long-term impact of MESPOM on his life – he says that “coming from a developing country that lacks high standards of education, studying in MESPOM has provided so much knowledge” and helped him develop his research and management skills. One of the most influential courses he took was Measuring and Predicting at Manchester University in the third semester, where he learned to measure pollutants in the environment and study their interactions in the environment. This course allowed Dany to see himself as a scientific researcher, and motivated him to continue his studies at Manchester University for his independent thesis research.

His thesis topic is “improving the characterization of natural organic matter (NOM) using high resolution techniques in peatland catchments” and focuses on the physical and chemical properties of natural organic matter by characterizing each component of the matter. This research will contribute to the body of knowledge which allows scientists to understand the chemistry of rivers and potentially improve water treatment, and inspires Dany to consider further doctorate studies after MESPOM.

Outside of his academic interests, Dany has also had a meaningful experience traveling to the locations of the program. He enjoyed every bit – the food, the people, the tourism – and felt the comparative interactions with people in different places in the world was interesting. He has made great friendships, enjoyed meeting nice people in the program and appreciated and felt the support of the academic department and program staff, such as Gyorgyi, Irina and Kriszta.

Dany is contemplating continuing his education and pursuing a doctorate degree in Europe, possibly in Manchester or Spain after completing MESPOM. However, he sees promise in returning to Ecuador to work in a government position in order to apply the skills he has learned, as his scholarship program encourages. Whether it happens after MESPOM or a Ph.D. program, he wants to return to his home country and work hard to improve protection and management of Ecuador’s natural resources, specifically in water management or academia as is the aim of the Ecuadorian government for scholars abroad.

*This current student story was written by Dany Avalos (October 2016) and edited and adapted for the website during his third semester conducted in Manchester.