MESPOM: A programme that stems from its students 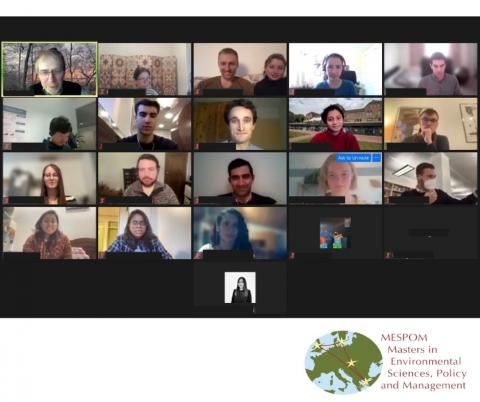 Diversity and interdisciplinarity are among the key words that emerged from the last Alumni meeting organized by Aleh Cherp, the full-fledged MESPOM founder.

The event was organized with the objective of involving the former MESPOM students’ experiences and ideas in contribution to the question: “How can we improve MESPOM?”

This was an opportunity in which former generations of MESPOMers merged together their views to better design the experience of future MESPOMers.

Crucial knowledge was collected during the meeting on the reasons that pushed the Alumni in enrolling in MESPOM, their expectations and the career opportunities that they encountered after their studies.

Among the views emerged MESPOM’s interdisciplinarity which is also a key characteristic of the environmental field. This trait helped students in exploring the sector, finding the issue or topic they were most interested in specializing. This opened to them a wide range of possibility career prospects after graduation.

Diversity was another popular word during the meeting. MESPOM is, in fact, a melting pot of cultures and nationalities that move together in different countries and universities. This collection of diversified and shared experiences creates relationship boundaries meant to last.

What can you get out of this? Well, if you’re reading this and wondering if MESPOM is your fit, rest assured that the programme, as it stands today, is the result of an evolution fueled by its own students.

You would embark in a journey in which your views and opinions will always matter and your feedback will always be considered and implemented.

If instead you’re a MESPOM former student but couldn’t make it to this reunion, don’t worry, there will be more. And if you’re a MESPOM enthusiast and want to share ideas or views, reach out to the MESPOM Alumni Association at alumni@mespom.eu.

If you did not know MESPOM has a super cool Alumni Association, born in 2020 and working hard to build bridges between current students and 500+ Alumni.